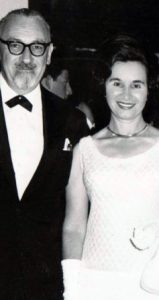 HIS VISION OUR HERITAGE

Beit Issie Shapiro was established as a direct continuation of the activities and legacy left by the late Issie Shapiro, a Zionist who had immigrated to Israel in 1977, together with his late wife Lucie, from South Africa, with a glorious dream. He believed in equal opportunities for all people and had a dream to make a change inIsraelin the attitude towards people with disabilities. His vision of building and developing a community that would support and assist those with special needs inIsrael, gave the inspiration to Beit Issie Shapiro.

Issie died during a flight to the US to raise funds to develop a program for people with special needs in Israel. His heart stopped, but his vision has become a guiding light for those who have continued in his path, led by his daughter, Naomi Stuchiner. After his death, his family founded Beit Issie Shapiro and Naomi, then a young social worker, was chosen to continue his important work.

Always a leader, Issie inspired his whole family with his enthusiasm and giving personality. Over more than thirty years, five generations have committed themselves to its development. In the US, the lead was taken by the late Willie and Celia Trump (Celia was Issie’s sister) who, together with their sons, Eddie and Jules – with wife Stephanie and their children – have played a major role, especially in developing an overseas funding and friendship base for the organization.

In South Africa and the UK, the extended families of Issie and Lucie, have found a way to express the values their parents bequeathed them, through their support for the organization. Beit Issie Shapiro’s 30thanniversary was  a rallying point for the grandchildren and even the great-grandchildren, to become involved. Today the family network extends from Israel to the US, Canada, the UK, and South Africa.

Issie Shapiro – a man of dreams and a man of action. A man with a great abounding love of humankind. He dedicated his life to spreading his advanced social vision. In his death, he left us a legacy to which we are all committed.  We will continue in his path of love and giving. Never stop doing – and never stop dreaming.

X
Get in Touch