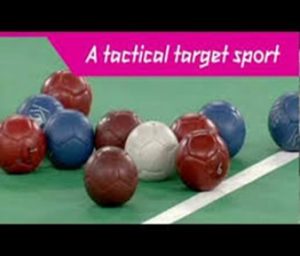 At The Beit Issie Shapiro School for Children with Complex Motor Disabilities in Ra’anana, Israel, much emphasis is placed on sport in our daily program. Our students take part in walking groups, cycling groups, hydrotherapy, soccer and boccia. In addition to its importance in maintaining a healthy body, we believe that engagement in sports activities empowers our students, provides them with an opportunity to develop normative social interactions in a fun filled environment, and can serve as a means to improve behavioral, motor and cognitive skills.

6 years ago, we introduced boccia to our lineup of sport activities.  Boccia is a Para-Olympic game in which players are required to toss a ball as close as possible to the target white ball.  It can be played with one player against another, 2 couples against each other or as a team game with the team gathering points according to whose balls are the closest to the white ball. The game is played all over the world, and in Israel is becoming more and more popular.

N started playing boccia with us 3 years ago at the age of 8 years.  As a result of cerebral palsy, N has significant physical disabilities, visual impairment, and limited hand function. He uses his motorized wheelchair and navigates in the school environment, but often shows difficulty using his vision to focus on other activities such as reading and playing games. He feeds himself independently yet due to limited strength and active range of motion he has difficulty using his hands for other functional activities. He is very social and loves to make conversation with the staff in his class, but has more difficulty initiating conversation with his peers.

As a result of his weekly participation in the school boccia group, N has acquired many new skills in a variety of areas. He is able to look for the white ball and throw his ball in the appropriate direction. He engages with his peers, reminding them which stretch exercises need to be done at the beginning of each lesson, asks friends to be on his team, and has learned to wait patiently for his turn. From a cognitive perspective, he is acquiring spatial concepts (near/far), counting skills, and concepts of quantity (more/less). From a motor perspective he has made very significant gains.  In his first year playing he used a ramp to roll his ball toward the white ball, due to limited hand and arm strength.  In his second year, he was motivated enough to try to throw the ball on his own and made significant gains in accuracy and in his ability to throw farther distances as the year progressed.

Most significantly, N has discovered a pastime that he loves and which allows him to engage with friends in a fun healthy activity, one that he can participate in for years to come. He loves it so much, that he was very disappointed that he had to miss his group last week, for a conflicting activity.  No worries, N, you’ll be back with us next week! 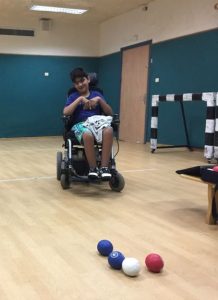